Off to the Brookvale Oval this morning for Grand Final day.

Son of surfmuppet, Rory, playing on the wing for the Berowra Wallabies clash against the Narrabeen Sharks in the U-19 Manly Rugby League Championship final.

One of those awesome late winter days of bright sunshine and temps in the mid 20s with a touch of a breeze in the shade. Festival atmosphere at Brookie Oval with sausage sizzles, ice-cream and coffee stands galore.

First up it’s the Avalon Bulldogs v the Mona Vale Raiders in the final of the U-17s. Get there 15 minutes short of half time with the Raiders well in control. Try to the Bulldogs closes the gap a bit but then the Raiders hit back and it’s into the sheds. Second half the Bulldogs come out firing and close the gap with about four unanswered tries. Into the last five minutes and it’s 30-24 with the Bulldogs on the attack but the Raiders hold steady and weather the storm. A final try to the Raiders settles the matter and they carry the day against a valiant Bulldogs side.

Next the Wallabies take the field against a fancied Sharks side. In their four or five clashes v the Sharks this season, the Wallabies have only won one so they’re up against it today. The Sharks cross the line first but the Wallabies hold out and soon they’ve caught up and gone ahead. Into the sheds at 10-6 to the Wallabies.

Early in the second half and the Sharks pile on the pressure but are not able to turn it into points. The Wallabies score another couple of tries but even with the gap opening up, the Sharks always look dangerous. Into the last five minutes and it looks like Berowra are coming home strong. But with about 3 minutes to go a punch up erupts near the Wallabies  line and it’s on for young and old. Three Wallabies and two Sharks get marched for 10 minutes in the bin and the game continues for the final couple of minutes with the Wallabies one man down. It looks like it’s too late for the Sharks however and sure enough the final siren goes off with the Berowra Wallabies lifting the cup.

A great day had by all. 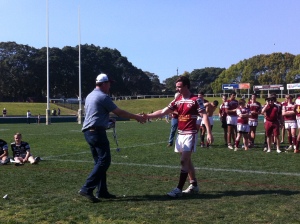 Rory gets his medal!

3 Responses to Berowra Wallabies U-19 Champs