Stiff and sore on this Australia Day morning, trying to put some words together to describe a great swim yesterday. Competing with a chainsaw snarling in the bush fifty metres away, as a couple of neighbours practice their version of Advance Australia Fair on the Husqvarna Harp.

They’re a pair of likely lads, the neighbourhood anti privet and other noxious weeds vigilantes. Why they’ve decided to hoe into it at 9am on a public holiday has probably something to do with working off the effects of getting into the turps last night. Still, as one who experienced a touch of the joy at letting loose with a chainsaw, can’t find too much fault.

Don’t know what’s worse – the snarl of the chainsaw as it bites into the woody flesh of a nice juicy privet truck, or the silence between the bursts of machine gun fire, chainsaw style.

Brings to mind the waiting game between the rush of blood to the head on Saturday noontime resulting in the no-training-done-entry into the Big Swim, and the blare of the starters horn at 1012am when the over 50s bull elephant seal wave hits the water.

Bit of nervous anticipation. Stomach butterflies a fluttering. What’s the weather going to be like. The state of the ocean. Will the distance and pace be too much and the ignominy of the ride back to the beach in an inflatable. Never mind getting drowned, succumbing to a coronary or providing an early lunch for the robust wildlife known to frequent the area.

Bad news overnight with the death of cousin Patrick O’Malley in Chicago. Originally from Ballinrobe, Country Mayo. Patrick had only just turned 40. His father George passed away a few months ago so it’s been tough on his mother Margaret and his brothers and sisters. Dedicated the swim today to his memory and took a lesson in gratitude for having the health to jump into the ocean and take on a challenge such as this.

The organization of the Big Swim is second-to-none. Shuttle buses are laid on to take the punters from the car park at Careel Bay Ovals, just off Barrenjoey Road. Got there just after 8am and was soon whisked down to the sand at Palm Beach Surf Club on Ocean Road. Registration tents all set up, get the timing chip personally attached to the left ankle by one of the charming ladies on duty. How’s that for service? And a nice pink cap for the over 50s bull elephant seals division.

The waves are set up so us lot are right in the middle so there’s going to be plenty of company out there with the fasties of the following waves ripping into the midst of the lasties from the old fogey’s brigade. 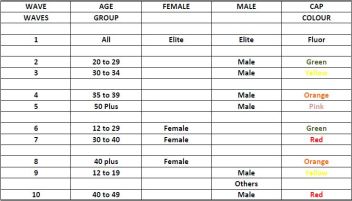 Run into Port Macquarie Neil, Richard the Sharkman and Jim D, aka the Flying Sardine. The boys are fresh off doing a 5km swim at Penrith on the Saturday, this the Big Swim today, and are planning to do the 2km Australia Day swim around Farm Cove on the morrow. Hard core.

Next meet up with Gordy, the only one from Bondi Fit it seems – but turns out there were a dozen or more of Spot’s lads and lassies lurking about waiting for their time to hit the brine. While the time away slapping on the sunblock and talking things swimming, who’s doing what to whom, Piano Paul’s new Sydney Swimmers squad etc.

The warm-up reveals plenty of seaweed closer to shore and a set of three or four sizable waves coming in to dish out a few slaps to the unwary. Water temperature is balmy, the ocean is calm out the back, the sky is blue and it’s already above 30 degrees by 9am. A couple of choppers hover out over the water checking no doubt for toothy guests or giant, man eating squid. Lots of surf craft out there providing water safety and combined with the bush fire brigade people on traffic duty on the roads, makes this look like a military operation in terms of organization.

Enough of the prelims.

Much debate on where the best rip is to get out amongst the pink hat bull seals. In the end everyone just scatters as this monster wave of punters hits the water. Follow a group of lads heading south along the beach, who seemed to know what they’re doing , but decide not to run with them all the way to Newport beach and so tangent off into the surf. Get under a few breakers and then settle into a steady pace to get the race going.

Anticipation over, now the action of getting back into it. First buoy appears as a blimp on the gentle swell, the field compresses a bit but get around it without having to dodge any Bruce Lee style breaststroke kicks.

Now it’s just a matter of holding the pace and concentrate on the stroke. Not long before the ladies of the following waves catch up and soon it’s a flock of sea nymphs streaming past the tail end of the pinkoes.

Try to catch a draft off a few of them but it’s hopeless and so settle back to admiring the view.

Half way through now and it’s Scotty barking from the engine room that the dilithium crystals are about to explode so it’s back off the pace a few notches to avoid disaster.

Little Head, the headland to the north of Whale Beach, hangs around for more than a while and by now the fasties from the last wave, men 40-49, are hammering past. These klingons are not taking prisoners so the game is hold a steady course to avoid crossing over their forward trajectory.

Finally, the can denoting the turn west in towards Whale Beach. Still a way to go but starting to fade badly. Couple of black and white checkered cans for the punters to swim between and it’s the final slog to the beach.

Lady comes up on the port side looking to sweep past and the primordial competitive synapses kick in, match her stroke for stroke but then fade right off in the surf zone. Get bowled over by another lady body-surfing in but couldn’t give a stuff at this stage. High five with Spot who’s waiting with a GoPro by the finish line for his stormtroopers to come in. Couple of peaches and bottles of water waiting courtesy of the organizers.Well cooked by the hot sun but the sunblock has done it’s job, so minimal sunburn. 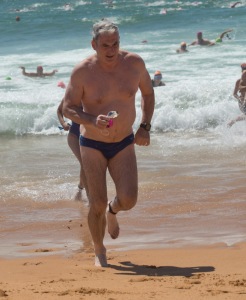 Swap notes with Gordy, pick up the gear bags which had been transported over from Palm Beach in a couple of trucks, pack back onto the shuttle bus and we’re zipped back to the carpark.

Managed to do the swim in 58:35 which was good enough considering zilch race preparation.

All up a great swim and a wonderful event organized to perfection.