Butterflies not so much dancing but leaping around inside as the brother slaps on a potent mixture of sunblock and Vasoline onto surfmuppet. Looks like a combination of Lazarus coming out of his coffin and a dugong on holidays in the west of Ireland. Aughinish Island is the scene of departure of wave 2 of the Frances Thornton Memorial Galway Bay schlep across the bay to the platform at Blackrock in Salthill. Great cause, Cancer Care West. Mission is simple enough – as Andy says at the Friday night briefing in the Salthill Hotel – just jump into the water in County Clare and get out in County Galway after roughly 13km.

Did lots of head miles during the week on whether to suit up or not. In the end went in the speedos only and glad for it as the water was ideal for a long distance swim. By the time the muppet gets out of the water in Blackrock 3 hours 56 minutes later , he is roasting, which is just as well as he has to hang around for a few minutes as the swim has been fast enough that the relatives haven’t arrived and the muppet stands around looking like an eejit dripping wet and starting to cool down. Soon the gang arrive and it’s into the warm clothes as the drop in the core temp has started to manifest in a nice bit of shivering,  the southeasterly increasing in strength across the bay. 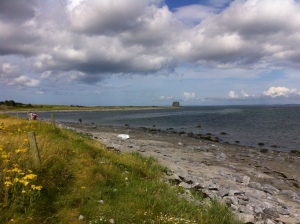 Water temps in Galway have been at unheard of levels this summer. First swim last week for surfmuppet and son fresh off the plane, almost go into thermal shock in 21 degree water off Blackrock. During the last week this has dropped until it’s about 16-17 on the day of the swim. Still high for these waters but whose complaining. Grand altogether. In his wisdom, the muppet decides to drive to what he thinks is Aughinish Island on the Friday to test the water. Turns out it wasn’t Aughinish at all but a beach a few km’s up the road. And the water temperature is the same as it is in Blackrock across the bay – funny thing that. Anyway, no wetsuit, let’s rock and roll.

All greased up and wave 2 wades out into the water and turns back to shore for a photo. All up there are 75 swimmers in the race, with 53 soloists and 3 relay teams. Wave 2 has 18 swimmers, 4 au naturel and the rest in the wetties. First touch and the water is cold but not shockingly so and on the 1130 “Go!” the plunge into the depths doesn’t have the sharp intake of breath/ cold shock effect.

Galway in the Distance

The support boats are on station off Deer Island, about 1km into the bay. There are two bouys – a rectangular orange one to the west, and a round orange one to the east. The easterly one is where the muppet has been assigned to and where son Rory is waiting on the support RIB kindly donated for the day by Brian and his daughter Sofia. Dr0pped Rory out to Spiddal, a small town to the west of Galway, at 830am that morning to meet up with Brian and to set out for Deer Island from there. Have all the water, sports drinks, bananas and corn crackers/peanut butter/ honey turbo snacks in Rory’s pack and a plan agreed upon for the hydration and feeding. Going with every 40 minutes. Change this during the swim to 30 minutes which worked a treat.

The rest of the wave blast ahead out to the waiting boats as the muppet sets a steady pace and takes in the seascape below which is all North Atlantic seaweed, rocks, shells, shell fragments and loads of different jellyfish species. Thinking would love to come out here again with a GoPro on a sunny day. Normally take about 1 to 1.5km to warm up and so it’s a bit of a struggle to not lose the field completely and plenty of sighting to keep the roundy buoy aligned and to pick up the boat. In truth, a bit knackered by the time Brian, Sofia and Rory heave into sight and the swim proper begins. Thinking, this is not good, with the Galway coast still a sliver of a dark shadow to the north. But, as it turns out, this is all just surfmuppet head dark magic.

Past Deer Island and the reef drops away and the world below is a murky green with lots of jelly fish – check out the Galway Triathlon Club JellyFish-0-Meter (http://www.galwaytriathlonclub.com/?page_id=6180). Probably saw all of these beasties during the swim, including some fairly solid ones which the muppet thumped into along the way – but no stings.

First feed after 40 minutes and then settle into the swim proper. Soon get a rhythm going and then the weather changes from bright and sunny to a buildup of dark skies coming from the south. Hit by a rain squall and the sea gets a bit rougher. The southeasterly breeze starts to freshen and a following swell lifts the legs and gives a bit of a boost as we reach the buoys mid swim. This year the organisers have placed two buoys in the middle of the bay in order to concentrate the field and prevent too wide a scatter of boats and swimmers which has led to some problems in other years. An air corps chopper buzzes the field around this point and the 6o odd boats soldier on through the water towards Salthill. 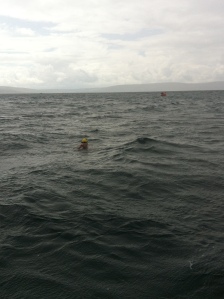 By prior agreement with skipper Brian, he sets the course and it’s up to the muppet to keep station with him. Works a treat. Feeds working well with Rory digging into the bag of goodies and flicking bananas and crackers, water etc to the performing seal behind the boat. Manage not to touch the boat throughout and get the hang of feeding while threading water ( in training, it’s been feeding on the beach or in waist deep water).

Hydration in the Sun

Once past the mid point and psychologically it seems to get easier. Sun comes out for a period and it’s great to feel the warmth on the shoulders. Decision to go without a wetsuit has been vindicated as the water temperature now is comfortable. Getting stronger as the Galway coast approaches and soon the final bouys come into view in the distance. By this stage the final feed is over and it’s head down for the last of the swim. Weather has closed in again and the wind has come up with the sea. The Ferris Wheel at Leisureland is now the most prominent from eye level and the muppet starts to zero in on this. The yellow/ orange shape of the Blackrock diving platform emerges from the horizon like the conning tower of a submarine and we’re almost home. 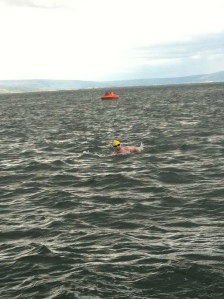 Enjoying the moment now. There’s a certain sense of poignancy mixed with elation as the end nears. The swim has been top of mind for months now and it’s always great to get back home for a visit. Soon as the swim ends, the trip home starts to wind down and the return flight beckons.

But for now, Blackrock is a hundred metres away. Brian, Sofia and Rory on the support boat are peeling off and a kayaker and a few SUPs take over to escort the swimmer in. Other support boats are heading out to sea as their swimmers are deposited on the shore where a crowd awaits in a festival atmosphere. Lots of gas still in the tank and so stroke to shore like there’s still a few kilometers left in the muscles. Slow start, fast finish. 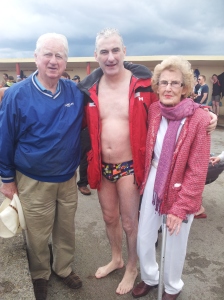 Low tide and so it’s a bit of a hobble over sands and rocks where a pair of helpers at the foot of the steps reach out if assistance is needed. All the swimmers get a bit of a cheer from the crowd and then it’s back on dry land, game over. Cup of hot coffee and a HH sailing jacket to keep the wind chill off. Photos. Last of the swimmers arrive. Traditional launching of balloons from the top of the diving platform in remembrance of those who have passed away.

Great event – thanks to the organising committee led by Brian, Kevin and Fiona Thornton, Andrew Flanagan, Fionnula and Paddy, Dave from CCW, and all the rest of the team including the support boats and crews, kayakers, SUPs, RNLI etc.

Special thanks to Vlad, Charm, Evan and the rest of the Vladswim crew for the distance preparation and to Spot, Paul and the gang at Bondifit for laying the original foundation. 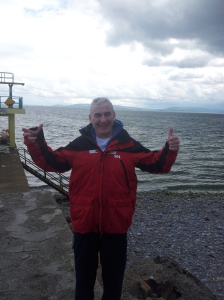